Subsidy issues - Simple solutions for all.

Malaysia now is in a new era of government and thus the government must listen to the Rakyat.

Fuel subsidy is a real pain in the backside for a lot of people, and they should learn from from both Indonesia and Singapore on how to run a fuel management system.

My take is as such:

Corporates:
Link with a Fleet Management Operator, such as Petronas, Shell, Petron, BHP or even a 3rd Party Fuel Reseller such as how in Singapore akin to BestFuels etc for DIESEL MANAGEMENT.

How it work? Every card /  RFID Token has preset quota per day / week and month and when it's finished, it's finished and they have to pay FULL TARRIFFS. So as a company, they could pool the subsidy up to their limits, based on their usage.

Example: ABC Bus has 20 Express Buses and each uses 260L and drives 2000km....which is a lot. So the quota will be 250Lx28days=7000L per vehicle and the preset fuel will be billed accordingly, on month-to-month basis. If the company has poor payment record, then the fuel subsidy will go like the Commercial Vehicle Owners, such as Grab etc.

Commercial SME users can use APP BASED discount where they are given discount coupons for their purchases and this is subjective to their 'QUOTA' usage. Of course, like here in SG, we have 'LOYALTY' cards which is nothing new, but these cards can come with preset discounts like 10-20% depending on membership *(standard, commercial, grab-driver)++

So fuel prices MUST FLOAT. To ensure dealers are not short changed, the price they pay the company is based on the amount of fuel dispensed, less all the coupons and discount codes. Again, this is to ensure fairness and equality, as some stations lose fuel to ullage is approximately 400L of Petrol a day. As a former station owner, our net dealership discount was only 3.5sen per liter and over a tankful of 52,000L delivered, we must sell that all in a day at least before we lose money due to weather.

We actually make a little bit more money on the shop stuff, like prepaid and e-wallet topup (50c per transaction) and what others.

So, if foreigners want to refuel, they pay as per float and if B40 wants to get super cheap fuel, the subsidy may be higher because they have more coupon or subsidy whereas those with high capacity cars, get lesser coupons.

So if you run out of coupons or if you are not entitled to subsidies, then you pay the full price. Simple as that. You cannot have a BMW driver enjoying same subsidy as those with earning less than RM4000.

The mechanism could be as follows:

This will be far lower than the RM2.05 fuel price but they won't bleed too much as logistic cost won't go up. The bare subsidy can be applied directly to the fuel provider as a pool or likewise.

Put to this perspective, a Thai Pickup, refuel 60L x 3 a day = 180L of subsidy lost daily x 20 days...which is about 3800L of fuel subsidies or approx RM2000!
My Singaporean Brethren are no better with their fuel monkey tricks, despite the RM4 full price of RON97...so at least there is a sense of targeted subsidy for the needy.

In a way, 50L of petrol = 700km for a biker, or 20 tankfuls of a Honda Cub, 1000KM for a small car based at 10km/L consumption, and these will spur the need to budget their commute to public transport.

As for Stage Bus, maybe the LTA-PPP Bus may work well, where the bus, fuel are by the MOT, and operators charge for the Labor and Operations. At least we will know the bus will be on time and maintained.

Honestly I play cheat alot cos I HATE QUEUE, esp paying for toll.

Touch n Go e-Wallet account. Top it up RM100 (can auto reload also). Recommend use a MALAYSIAN NUMBER, Maxis Hotlink is good, 30day validity, you can get free data, just topup RM5 to make it alive every 15-30 days...or Digi/Altel with their 365 plan.

TNG RFID sticker..this one U can buy on Shoppee or many shops can do for you.

I don't like to permanent stick, so I recycled an old McD VIP decal, put in middle of it, place 6 INCHES (2 fists) from top n bottom, macam how we stick road tax disc last time, AWAY FROM ANY OTHER devices especially if U got those gantry cards. If you do, place yr gantry cards in bottom of your car...this RFID is a very luan kuku nathen type.  I honestly way, have a clean left side, otherwise the alternative is more worse (paste at your number plate which must be PLASTIC)

Register, enter your plate number, and put the details, they will ask if malaysian car...just say yes.. cos Sabah Sarawak now plate same as ours...and wait for approval and activation.

Then, moment of truth, test at the RFID Lane on the toll.

If OK, then all good. Money deduct from eWallet. U will get a notification for that.

Many place , parking is all DIGITAL, so pay using your TNG App, and shop locally using the ewallet like 7-11, Lotus (TESCO) , MyDin *(CHEAP!) and more

Understandably, your TNG Card is DORMANT, so you need a new one. You got 7 days to get a new one but don't kanchong, Link your TNG Card to your e-Wallet and money will be deducted from there. Then once you reach JB, GO GET A NEW ONE AND TOPUP. This is for your ROADCHARGE! All Tolls now use E-Wallet money, and your Singapore based Debit Cards can be used in the wallet.

Check your card status by clicking TOLL button on the app and if your card is INACTIVE- means you are screwed, New Card is needed. Otherwise, you may be able to get a refund if you registered it on the TNG Portal.

YOU STILL NEED VALUE IN YOUR CARD FOR ROAD CHARGE!

That is similar to Trace Together in Malaysia. You can either use your IC Number as ID or Passport Number but I suggest you use your Singapore NRIC for that as your IC don't change.

Register using your Singapore Number and then register your overseas vaccination cert on the HelpDesk.

One trick is for your kids to be placed in your account, so one check in, all checked in.

Vaccination Process update was covered before.

It takes 5 days to update! Bring your ORIGINAL Digital Cert!

As Malaysia tend to cock up, please keep paper printouts so you cover yourself.

This Serves As A Legal Notice

Azrin Info Web and it's affiliated sites are hosted across the world, with Domain Services in United States and Entity Services Registered in Singapore, United Kingdom and many other locations.

While browsing the content here and throughout, your activities will be tracked by so many 3rd party services, for financial gain such as advertising or demographics or anything else for that matter and may be owned by Foreign Government Agencies.

The Data and Information may be passed and resold to other parties and by coming here, you consent that you have no right over your own data and stuff like that. In other words, ANYTHING GOES, similar to the dark web and the operators and content providers, it's agents and affiliates are not responsible for your safety and security.

Malaysia Government Regulations require us to inform you that our servers are located across multiple countries, commonly known as CLOUD DISTRIBUTED NETWORK and Services in Malaysia are operated by Zyraz Technology Berhad, Co Reg 809970H and it's subsidiary, ZYRAZ VENTURES which are all owned by Zyraz Technology Singapore, UEN SG53231076D.

Our servers are located primarily in Singapore, Malaysia, UK, US, Ireland, Germany and China via AliYun Cloud Servers. So these governments can get hold of your data without us even knowing.

As such, you are responsible over your own actions.

So you are getting ready rite? Don't get caught out with our good friends in Malaysia.

As we all know, they will Roti Canai / Prata / Tosei all of us as much as possible. So here is the thing you need to do.

Your Vaccination Cert - Print off from Notarise and SCREENSHOT your cert in JPG from TraceTogether.
SingPass is needed. If you have those manual one from the center, also can but LAMINATE IT!

MySejahtera App. I will recommend get a local number + use your IC Number instead, not your passport. You can register using an email address, but you know lah how efficient their are.

As of now, I used my phone number in Singapore and DON'T WORK. Best go buy Maxis Hotlink as they have 120 day expiry and RM5 topup will let u renew (or even SOS topup) 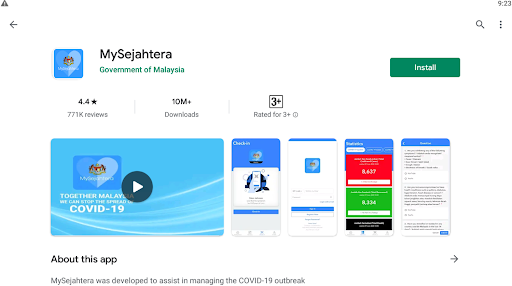 The politicians say they will recognise our cert but we all know how it goes, and their fines are super high (RM1000 ~ S$350) so lets not be stupid.