This evening, I almost had my life ripped out by a silly idiot who claimed that he "did not realise the Pakcik was going to stop for the Red Light at the Pedestrian Crossing" and me being an ON-Time On-Target speed demon, whizzed in and swerving between the lanes only to find out the pakcik beside me was knocked off his machine.

The impact caused him to fall, fracture his ankle and also that the point of impact almost tore his helmet off, and the driver claimed that he was driving slow. The stretch of Yio Chu Kang Road in front of Jalan Napiri off Block 506 Serangoon North Ave 4 is a deadly zone with kids and shady trees. 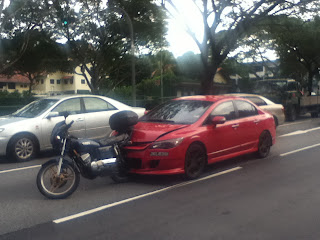 See the impact of the car crushing the motorbike directly into his bonnet. It was supposed to be me... as I was on the same lane.. just that I swerved to the other side.

The mess the guy made is terrible and I really feel sorry for the man. What is worse is that the driver just passed his license 2 years ago in Malaysia and is holding only a Malaysian license while working in Singapore, as it is against the law for Residents (workers alike) to own and operate foreign registered vehicle and they must convert their license after 1 year being in Singapore. 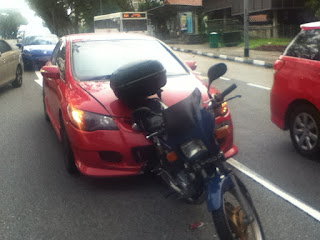 So what caused this? Well, the road condition is NOT Raining and it is not wet at the time of the incident and no skid marks showing he slowed down or jammed emergency brakes.


For me.. I do ride recklessly ..but it saved my bacon many times.. this time.. it did again.. but it really brought me shivers.

From what I got ... the rider suffered MULTIPLE FRACTURES of the Femur and Leg and require multiple operations tomorrow morning.

May Allah bless him and wish him speedy recovery.